Working on a luxurious cruise ship means that you can do it from anywhere in the world, even in South Africa, where top recruiters and concessionaires on constantly on the lookout for hard working, dedicated South African cruise ship workers.

Well, then cruise ship life might just be for you!

No matter where in South Africa you live, you can easily apply for a cruise ship job. The main ports where you will depart from are Durban and Cape Town, with some of the largest cruise liners in the world berthing here. East London, Port Elizabeth and Richard's Bay along the east coast of South Africa also provide ports of call for cruise liners.

Cape Town is perhaps the most exciting port to visit, where the Victoria and Alfred basins are used as far as possible for the medium sized and smaller cruise vessels. 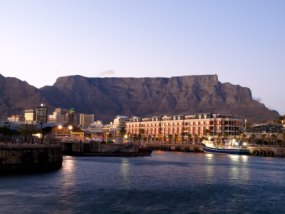 This used to be the harbor, but now houses the world famous V&A Waterfront complex and drops cruise passengers off right in the heart of the vibrant Fairest Cape. The large liners dock in the main harbor.

Durban Harbor has a well equipped cruise ship terminal for passengers, namely the N-Berth on the T-jetty. This is busiest during the summer months between November and May each year, with one cruise ship based there as a "resident." There can be as many as 3 cruise ships in the port at any one time.

MSC Starlight is one of the main cruise lines in South Africa, based in Johannesburg with itineraries throughout Europe and the Mediterranean. Their fleet includes the MSC Sinfonia and the MSC Melody boasting a crew of around 700 and 530 respectively. You can easily be part of this crew and sail off into the sunset.

Princess Cruises operates the Ocean Princess out of Cape Town traveling to London and Paris.

South Africa is a popular cruise ship destination amongst the small and large liners. Some of the main lines visiting the South African harbors, in addition to the ones above, include:

Aside from the large, luxury liners, many smaller cruise ships operate out of South Africa with harbor and coastal cruises all along the east and west coasts of the country. What an amazing way to explore the beauty of Southern Africa!

Interested to learn more? Just become a CruiseJobFinder member and you will gain access to all the hiring agents and concessionaire companies - and much more. As a subscriber you will also get detailed company info about cruise lines and recruitment agencies around the world, plus interviews with recruitment agency directors and experienced cruise ship employees, who give valuable advice about getting cruise ship jobs.

Start Your Cruise Job Search Today!
There are thousands of open jobs right now. Simply click the button below to start your job search.
Start Now!
Not a Member?
Join CruiseJobFinder!
Get Started!
Total Open Jobs
6,038
Jobs by Category